Would you rather listen instead? Click here for the 10-minute audio recording. 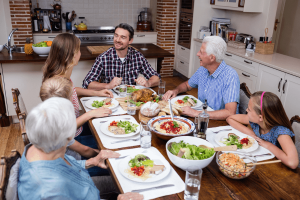 This is the time of year that loved ones begin to gather, and while you may have your own emotions about that (anticipation or apprehension, family dynamics being what they are), here it aaaall comes.

Thanksgiving kicks off a cascade of holidays and sometimes contrived or obligatory events. Still, it is the time that I, in my elder care teaching and consultation, will traditionally begin to chirp about noticing change. We have an opportunity to notice change in our aging loved ones and begin to figure out how we may build support and plan how this will go. This is Discovery.

It’s discovery in that Thanksgiving presents a good time to notice things, not barrel in had have TheTalk. Let’s simply look, note, and gain some clues as to what’s coming down the pike, what may be in store for our aging loved ones’ futures, and how we can make things easier for the folks we love.

Online you will find plenty of helpful articles if you google a phrase just like this:

“What To Look For When You Visit Your Senior Parents”. An entire page of really good articles will render. Let them help to guide your discovery.

Use those and the benefit of folks like myself who’ve worked in eldercare to learn how to look for -and notice- change. Everyone had their first foray into discovery and it might be better if it was discovery now and not in-your-face debacle.

Likely the best way I can do that is to tell you a story of an adult child with whom I worked closely in the care of each of his parents. Over time we had the opportunity for many conversations and as he began to realize what was what. Then he and his family made changes, and supported each other through their journey as his parents aged and passed. Finally Sam and I met to look back at that journey, with the luxury of hindsight, -always 20-20, right?

Sam’s story, a story of Coming to Know

Sam and I are meeting over coffee and he is telling me his recollections, and his insights as they’d developed. He began by sharing with me what he called his “period of Coming to Know”. He confessed that he’d not noticed, nor had it occurred to him to notice, or do anything for a very long time, maybe one or two holiday seasons. Looking back, he said he must have sensed change as he recalled making himself available to see how he could “help out a little extra”.

They were so subtle, the emerging needs, and his innocent lack of awareness, that he didn’t even truly acknowledge them to himself, yet he took on the job of making sure all the holiday bases were covered like the preparation for a festive meal and the annual gathering of whatever family members could assemble that year.

It began with a sort of co-counseling.

Everyone had always gone home to Mom and Dad’s house, to the family home. It is where he and two sisters had grown up, it was their hub. A large home, now with just Mom and Dad, no one thought about the maintenance demands, the utilities, the mo-bilities of its now only two inhabitants.

Sam confided to me that for a couple of seasons, he just sort of co-counseled his folks in a helpful manner. He related how one year, after a hospitalization, Mom had been fresh out of rehab, and they cobbled together plans for the annual meal. A gathering still was held, but Mom was clearly not up to speed – “for that year,” they all assumed. Sam had not yet realized how much Dad was doing for Mom so that he couldn’t see the changes other than the impact of the recent rehab.

The following season was markedly different, Sam said. In the next year, both parents struggled physically, and his father began to experience a cognitive decline, the depth or extent of which he and his sisters largely could not fully see. That was Mom compensating for Dad. Nonetheless, he and his sisters spoke about it, and the sisters stepped in with the cooking as a “potluck opportunity” and one to involve the grandkids in some of their “newly-developed” cooking skills. Who knew Fruit Loops made for interesting stuffing?

Sam took a different approach that year after doing some reading and talking with some of his contemporaries who were also seeing changes in their family. Sam went into a bit of stealth mode. Sam fully entered Discovery.

He decided to try a combination of observation and “walking in his mom and dad’s shoes,” evaluating things from what could be their perspective. In his “walking,” he thought about their day-to-day and how much effort Mom and Dad, in their late 70’s were having to place in preparation for the event. With mom’s mobility issues, the sprucing up of the place, the cleaning, and the grocery shopping were much more difficult. Sam knew for certain she was managing his dad’s schedule and “programming,” if you will, because of his father’s cognitive decline. He envisioned them as worn out after a day of medical appointments and wondered if the insurance might confuse them.

Sam read a couple of articles online about what to look for when your elderly loved ones are changing. He learned some fundamentals, such as observing the home environment to look for clues. He made some notes and jotted a list of some things to be sure to check while there.

The sisters and grandkids arrived early on the day of the gathering, and the cooking and camaraderie were already in full swing when Sam pulled up. He took a quick look at the house’s exterior, checking for maintenance needs, and noticed a wobbly banister at the home at the entryway his folks used most often. He’d check how well-lit the area was (or was not) when everyone was leaving that evening.

Once inside the home, Sam’s stealth mode allowed him to participate normally in conversation and fellowship and to look around. Helping in the kitchen, he looked in the refrigerator and discovered old food pushed into the back. He checked some of the cupboards to see how much “regular” food was on hand and looked at a few expiration dates on canned goods.

Sam casually asked his parents if they still shopped at the neighborhood market where he’d worked in his youth. The little market was struggling “since the Behemoth Mart came in down the road,” his mother said and fumed that they did not like traveling through the traffic or the store’s navigation. Of course, everyone complained about higher prices.

Sam ventured into the bathroom and took a look at some medications for his mom and his father. He could see the dates they were filled and whether or not the quantities were going down and kind of gauge by that if they were (all) being taken. His mother was now utilizing a pill box, and he glanced at that, too, noticing that the previous Tuesday’s pills were still in their slots, not consumed. Mental note made.

He ambled into the den, to the little desk area by the built-in bookcases, under the pretense of pulling out the chair for extra seating among the group. There he noticed another telltale clue of change: piled up and unpaid bills. His father had always been a stickler for neatness and order with the finances. How was Dad was still managing the finances? He’d need to have a chat with them about that when the right time came.

Sam shared with me that he had read that sometimes an elderly parent’s grooming would suffer, but that was not the case that day. He could see the laundry in the hamper, but not an inordinate amount. He’d read about the potential for judgment to be off due to a diminished sense of smell, but his father had not gone overboard on the Old Spice mercifully. Both of his parents presented well.

The decision to look deeper and to help.

By the end of the day, Sam could see his mother tiring and withdrawing from the conversation. Was it his imagination, or did they seem kind of glad when folks gathered their coats and headed for the car with their leftovers in hand? Sam said he remembered kissing his mother on her cheek and telling her he had a four-day weekend; could he come back tomorrow to help out and sort through some things? His mother’s eyes squinted for a minute – a defensive look, but then a wan smile and a nod let him know some help might be welcomed.

There were a lot of other things Sam had read about during his due diligence that he could have looked for, such as losing things, finding things in strange places, disarray where there had always been order, moments of confusion as they chatted and relayed events or repetition of questions from the elders.

Sam declared that year to be the first holiday he’d really seen, felt it, and immersed himself in it – through his loved ones’ eyes and their changing needs. Over the next year, Sam, I, and his sisters also had many conversations about building a solid support team around his loved ones, including medical, legal, and financial professionals. We built the team – they and their parents called the shots.

This resulted in the adult children working as a team in their parents’ care as their loved ones continued to change and required different housing and medical care. Collaboration. Order. Honor.

Decisions were made with solid information. Sam told me that education and information had made all the difference. Also making a difference, he said, was having a sounding board and someone who could provoke his thoughts and get him to look ahead. Someone who could direct him and his sisters as they journeyed with their parents.

Maybe you are Sam this holiday, or have been, or are about to be.

Maybe you are Sam this holiday, or have been, or are about to be. This is an important time of year for me. When I owned my patient advocacy agency, I’d launch an annual seasonal campaign to raise awareness about change. I’d begin with “what to look for” and how to notice change. Then we’d shift into “how to talk to your loved ones,” to talk among your loved ones, with your siblings, all.

I’d roll my campaign from pre-Thanksgiving and into the new year.

We’d shift from discovery into communication, into team building and resource-finding, accompanied by more communication and planning. Then, of course, there was implementation.

I bring this up today because it’s that time of year for many. To me, Thanksgiving kicks off a season of, as Sam so aptly put it, “Coming To Know,” and thus beginning labors of love like no other.

If you’ve been a Sam, then please help the next Sam.

If you are a Sam and need some help, I invite you to contact me because I can surely help to make things make sense here. What are you seeing, and how do you deal with it?

I am in gratitude this Thanksgiving for all that I have, for my Sams, and all that you all have given me.